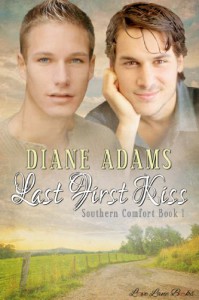 This is a story about a man (Trent) who wants to find a all in, forever, growing old together relationship. He's seen romantic gay couples getting married on youtube and he craves that.

Of course, what catches his eye is a eighteen year old farmer(Gage) who's already married. Yes, to a woman and he has two young children. (Ages four and two.) He becomes a father at age 14. CRAZY!!!  And yes he's gay in a loveless marriage.

But that's not all. The mother of his children was seeking a way out of childhood home because her step-father was and still is abusing/molesting her.

So there is enough drama in this story for two day time soaps.

Underneath all the drama really is a slow building love story. Gage who may be 18, but acts 40. The two kids are just the cutest, sweetest characters. The tension that continues to grow between the two guys.

The wife. She's so under developed as a character. Just a shadow, but no real substance. Just talked about, but not present.

The all to easy wrap up of having the wife file for divorce and leaving the kids and heading to parts unknown was too neat and tidy.

So overall I liked it, but ending left me scratching my head.

0
Tweet
Discussion
About me....Pastry Chef/Baker. I am not a writer, editor, publisher. I just love reading books, talking about books, and reviewing books. I mean I have to do something while the dough is proofing.
blogbookshelftimeline  Reading Challenge 2022
1537 booksfollowing 9439 followers

"Come on, say it again. I'm a perfect devil. Tell me how bad I am. It makes me feel so good!"— Anne Rice